Hello! Welcome to the first of what I hope to be a monthly series discussing speculative fiction graphic novels. As a lifelong lover of comics, I firmly believe that comic books belong on the shelf of almost any science fiction and fantasy fan alongside the works of Tolkien and LeGuin.

I loved Giants Beware by Jorge Aguirre and Rafael Rosado so much that after borrowing the library‘s copy I immediately bought a copy for myself and another for my yet-unborn nephew. While technically this book is geared towards elementary school kids, I reread it once a year. I am eagerly waiting to hear how my nephew likes it once he’s old enough to be trusted not to rip the pages. 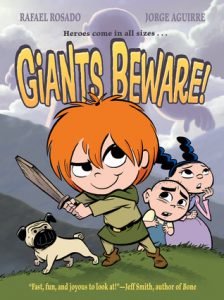 The first in The Chronicles of Claudette series, Giants Beware follows the adventures of three adventurous kids who live in a distinctly fairy-tale like village. Upon hearing from a village elder about a baby-feet-eating giant living in the mountains above the village, young Claudette recruits her best friend Marie and younger brother Gaston to help her slay the giant. What follows are typical fairy tale adventures as the kids escape an evil Apple Hag and outsmart the River King, before eventually learning that the giant is in fact a baby giant who likes to smell feet, not eat them. Along the way, in the tradition of many a great children’s book, the kids learn important lessons about friendship and courage.The book is an all-ages friendly feminist fairy tale romp.

The story is simple and very much geared towards children. However, Giants Beware has a treasured spot on my bookshelves because of the strength of its characters. While the graphic novel’s wallpaper of giants, witches, and enchanted forests is stock, the characters are not. Claudette is rude, smelly, determined, and completely irrepressible. She WILL slay giants, despite the interference of adults. Drawn with a messy bowl-cut of orange hair, Claudette gets to be a rough and ready girl who rushes off into danger and dirt. In contrast, her best friend Marie is neat, clever, and diplomatic. This makes sense as the young lady aspires to be a princess and spends her time trying to figure out if she can sense a pea beneath a tower of mattresses. Gaston, Claudette’s fearful younger brother, wants nothing more in the world than to be a great pastry chef and to convince his intimidating father to teach him to make swords. Gaston struggles to get his philistine family members to understand that life should be “savored not scarfed” (and to take the satisfaction survey on his latest roulade).The humor and joy with which Aguirre writes the characters make this book stand out from other feminist fairy tale stories. Aguirre never lets the progressive message of the story overpower its fun.

And feminist this story is, with its characters following their passions regardless of their gender. Refreshingly, Aguirre manages to set this up without feeling the need to tell a “the characters versus the patriarchy” story. No one at any point dares to tell Claudette that she cannot slay a giant because she is a girl. Marie wants to follow the more traditional route of princess and while Claudette views that as a “weird career choice”, she supports her friend’s dreams. Claudette also equally supports her brother’s joint ambitions to craft cakes as well as weapons. Giants Beware presents feminine interests such as baking and fashion as on the same level as the more masculine interests of monster-slaying and swordmaking. Gaston and Claudette’s father scoffs at Gaston’s dreams of pastry and sword making not because Gaston is a boy, but because Gaston is scared of swords. No one puts limits on the others because of their identity and no one is viewed as better than others because of what they might like to spend their time doing.

This approach to creating a feminist fairy tale doesn’t sound startling and yet when I compare it with other feminist fairy tale graphic novels, it is. For instance, Barry Deutsch and Jake Richmond’s How Mirka Got Her Sword falls into the trap of writing a “strong female character” who is strong because she disdains women’s traditional gender roles. While the heroine does gain her titular sword, it isn’t without taking potshots at knitting and the other work its heroine is expected to do as the daughter of the house. Apparently clothes that keep you warm and protect you from freezing to death aren’t as important as fighting trolls. Giants Beware in contrast never implies that Marie’s desire to be a princess is less worthy than Claudette’s giant slaying ambitions.

I bought a copy for my nephew because I want him to have stories where characters get to step outside of their gender roles and not be punished for it. I want him to celebrate princesses and pastry chefs along with giant slayers and blacksmiths. I want him to have stories where victory comes from befriending the giant, not from killing it. I want him to have stories that show how I wish the world was rather than how it actually is. Speculative fiction frequently comments on our own world by creating worlds that differ from our own but still recreate its problems. There is nothing wrong with that approach. Frankly, we need books like that. But we also need books like this one that are 100% pure fun and show us what the world could be like if we really just let amazing kids like Claudette, Marie, and Gaston be who they are.

A.E. Thompson has been a science fiction, fantasy, and comic book fan since before she could read by herself. She works as an arts administrator in the D.C. area. When not reading or working, she likes to spend her time knitting and catering to her demanding cats.She particularly enjoys young adult novels, stories about friendship, and books with marriage plots. View all posts by A.E. Thompson