Writing a piece on Bellairs right now is a bit serendipitous: we have the first major film based on his works* coming out soon.   To tell the truth, however, Bellairs was the first author I thought of writing about when the Spectacles crew started brainstorming about who and what to write about. Of all the talented authors whose works I’ve enjoyed, Bellairs is the one I would like to emulate the most.  True emulation is likely impossible – one can see this in Brad Strickland’s efforts to do so as he picked up the torch after Bellairs’ untimely death.

One of the primary reasons, I suspect, is because Bellairs’ fiction is deeply rooted in times and places that most authors simply won’t have access to:  the life of a Catholic nerd growing up in the 50s with interests in antiques, history, and archaeology who would later spend time teaching in both the Midwest and New England.  The charm at the heart of his works draws deeply from these experiences; for instance, his young adult novels all take place in the 50s and are centered in either the northern Midwest or New England.  The Face in the Frost, meanwhile, draws heavily on particularly Bellairsian understanding of medieval history: appreciative, but with a sense of playful whimsy that one suspects may be aimed at scholars who took themselves a bit too seriously.  Bellairs’ worldbuilding is done with a light touch, but it’s a deeply immersive hallmark that it would be difficult to replicate.

While replication might not be possible, there are still things about Bellairs worldbuilding that writers can learn that are particularly applicable to the genre of urban fantasy.  Bellairs approaches the existence of magic with credulity; he manages to whisk the reader along without making a big point about the whys and hows of magic going unnoticed in the larger world.  In The House With a Clock in its Walls, the reaction of Louis’ erstwhile friend Tarby to magic gives us just enough rationalization to not worry about it: people just don’t want to believe in magic.  In a time where media is filtered through newspapers and radios, this gives us the plausibility to stay immersed while keeping the focus tight on the perils at hand. 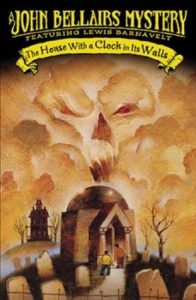 Details about magic as a whole in Bellairs’ books operate in the same manner: there’s no real system behind magic in any of his books, but there are enough intriguing details to keep you immersed for the duration.  In the Face in the Frost, Prospero “shouted a word that sorcerers can only speak a few times in their lives”, and in the Dark Secret of Weatherend the antagonist Borkman chants a spell that references “The Sign of the Four” and “The God of Storms” and ends with an amen.  Religion and the occult play together freely in Bellairs’ works, which helps him to not overplay his hand: after all, we’re not supposed to really know what’s going on.  Unfortunately, by relying on a mish-mash of historical occultism without a strong organizing principle, Bellairs’ worldbuilding does not establish a strong systematic mythos for others to appropriate.  A better approach is to attempt to be evocative of mysticism in the same manner.

As for evocation, Bellairs shines in pairing sensory details to the mood he wishes to evoke.  The feel of leather binding, the enticing scent of old paper mixed with tobacco, the sounds of crickets and fireflies during a cheery, magical evening: Bellairs gives us exactly the amount of detail we need to feel the way he wants us to feel without it ever seeming like he is overindulging.  These sensory details are also used to characterize the horror that challenges the protagonists of every Bellairs tale: the smell of wet ashes from the ghost of a man burned to death, or the horrid rustling a dead body makes as it moves of its own accord. Bellairs paints a handful of the most impactful sensory details setting the mood for a scene and writes inside them to great effect.

Finally, one can’t ignore how much the art of Edward Gorey contributed to the atmosphere of the Bellairs’ books in which it appeared.  In spite of the old adage with which we are all familiar, book art can make substantial contributions to how a work is received. In the age of the Internet, it’s worth taking a bit of time to cast about and see if you can’t find someone whose visual work matches your written aesthetic, and seeing if you can’t find a working partnership there. 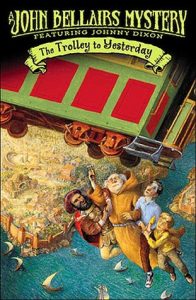 Bellairs’ books rely on a fairly repetitive series of character tropes.  Bellairs makes some effort to differentiate his characters through quirks and context, but for the most part you will always find one or two grumpy but kind mentor figures and a lonely 10-12 year old boy.  Occasionally there is an amusing sidekick or helper, like the flying sphinx in The Trolley to Yesterday or the Swedish rescuer in The Dark Secret of Weatherend.  Villains are usually understandable, but not misunderstood (with the possible exception of Melichus, from The Face in the Frost): they want power or destruction for perfectly human reasons and simply do not care about those who would get in their way.

It seems pretty clear that Bellairs created characters drawn from interesting sorts he encountered in his own life in terms of mannerisms and dress and drawn with simple, strong strokes.  They are not particularly nuanced or complex, but they’re relatable and often defined by how nice they are to their fellow human beings. It is also how Bellairs introduces his characteristic humor, whether through the playfully insulting banter between Uncle Jonathan and Mrs. Zimmerman or Professor Childermass’ good-natured (if irascible) sarcasm.  Many of Bellairs’ books simply have to do with people struggling with mundane concerns alongside extraordinary circumstances, and that kind of grounding helps to magnify the uncanny when it occurs. Relatively simple characters can work, and work well, if they are decent, relatable human beings with enough personal quirks to set them apart.

A note on representation: Bellairs’ books are super duper white.  There’s no way to get around that, and that’s a shame and not something to emulate.  As an author who wrote lonely boys because he once was one, I’d like to think that Bellairs would have eventually come around to including folks of other backgrounds in his writing.

On the other hand, Bellairs’ representation of women – and older women, at that – is to be applauded and emulated.  Protagonists like Mrs. Zimmerman, Rose Rita and Miss Eells are wonderfully realized as equal (and sometimes superior) partners and mentors for the protagonists of Bellairs’ books.  The Letter, the Witch, and the Ring mostly does away with the male characters entirely as Mrs. Zimmerman and Rose Rita team up for their own adventure.

Bellairs doesn’t ever bring up sexuality or sex in his books – given that he started with his young adult novels in the 70s and passed away in the early 90s, it’s not hard to see why.  It is, however, worth keeping in mind if one is drawing inspiration from his works. 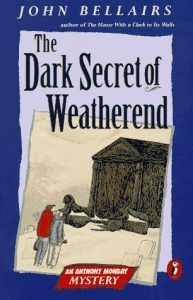 Like his characters, Bellairs’ plots are pretty straightforward: there’s bad person/force trying to do a bad thing that the main characters stumble upon, and growing tension as the full magnitude of their plight becomes obvious.  This is often paired with issues in the main characters’ home life – a sick grandmother, being bullied at school, and so on. Then the main characters go off on some kind of adventure to resolve the issue. It’s a fairly typical mystery structure and there’s nothing wrong with it. Often the nefarious plot is local in execution but world-wide in fallout, and sometimes Bellairs repeats himself – both the House with a Clock in its Walls and The Dark Secret of Weatherend feature dead wizards who are attempting to destroy the world with star or weather magic after they died.

Without his eye for detail and sympathetic characters, there wouldn’t be much to distinguish Bellairs’ plots from anyone else.  They do serve as an excellent example of how simple plots can be used to great effect, however. No plots within plots or convoluted timelines – just a slow burn mystery that is wrapped up nicely at the end with the main characters sitting around a cozy room drinking tea and enjoying each others’ company.

I would have loved to have seen what Bellairs could have done with another twenty or thirty years of life, and what he might have done in a market where fantasy was no longer restricted to the realms of Lord of the Rings and young adult novels.  Since we can’t have that, I would encourage other writers to instead look at what Bellairs wrote and try to draw inspiration from it. It won’t be the same – it never could be – but it could still be something just as worth reading.

*This article was written before the release of the film, so I have no thoughts to share where that is concerned!

Tanis Winchester enjoys both creature comforts and creature company. He entered the orbit of higher education in middle school and hasn't ever really left. He once had half a story published in a magazine that folded before it could publish the other half. He spends most of his time thinking about speculative fiction, tabletop roleplaying games, or the fantasy book he's working on. View all posts by Tanis Winchester