Every year on my birthday I do something I’ve never done before. This year I decided to read a book for every year I’d been alive and read them all before my next birthday. It worked out to almost a book a week. Then I thought why not write about what I read, appreciate the stories with a more critical eye (which I stole from a friend doing something similar .. thx Abi). And here we are.
Enjoy! 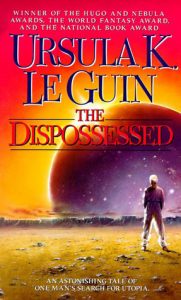 I’d been watching a lot of tv at the time, so this read-a-book-for-every-year-I’d-been-alive project seemed like a good way for me to reign in my tv viewing and get into more books. This was also partly inspired by Jo Walton’s book Among Others in which the main character voraciously reads sf and fantasy from the 80s and earlier, a timeframe I haven’t read a lot from.

She spoke with such reverence, such rapture, that I had to make a to-read list. That list, paired with a fantastic used bookstore close to work, and I instantly had enough books for a year’s worth of reading.

When I started writing blurbs about these books, I didn’t really know what to do with them outside of sharing them with my friends. Then I met the lovely folks at Spectacles at Scintillation in Montréal a couple of weeks ago and a space for me to post was born. I want to thank Spectacles for being so welcoming. I am very much looking forward to the collaboration.

Why do I start with book 2 you might ask? Surprisingly enough I chose something that wasn’t sf or fantasy for book #1. Surprising as that’s pretty much all I read. Seeing as it wasn’t speculative fiction it didn’t make sense to post here .. therefore book #1 remains a mystery.

Enough about me, on to The Dispossessed – book #2:

If you do not like to think, do not like to be enthralled and you pale at the sight of witty, pithy prose, then you will not like The Dispossessed by Ursula K Le Guin.

You can not read The Dispossessed nonchalantly. You read it. You put it down (usually only after a page). And you think. Your mind whirls. Whirls with thoughts on human nature, the nature of the universe, philosophy of thought, maths, physics, what IS the best stroke for swimming long distance. You’re about to pick it up again and realize a half hour has gone by while your mind has chewed on the words you’ve just read. You pick it up again. Read only two paragraphs before having to put it down .. again.

You notice the title .. again. The Dispossessed. And it takes a third of the book for you to realize all the multiple meanings it has. How carefully the title was chosen to sculpt this story. How it plays with the reader’s naivety at the beginning, then peels back layer after delicious layer of multiple meanings.

I loved how just about every page made some interesting comment on society. How it could be, how it is right now. She comments on pretty much every aspect, from the ethics of current prison systems to romantic love. She gets you thinking about what would make a society a utopia.

I especially liked the fact that university classes could be orchestrated by student demand, teacher initiative, or both. And that the folks in the utopia are appalled by the notion of examination being a pattern of, “cramming in information and disgorging it”, that such a system would be a, “deterrent to the natural wish to learn”. It’s a society built for thought, free exchange of ideas, “intellectual solidarity”, the antithesis of intellectual property, knowledge freely shared. Can you imagine scientists, artists, any profession from all over the world having that kind of freedom?? “They argued because they liked argument, liked the swift run of the unfettered mind along paths of possibility, liked to question what was not questioned.” I love how this isn’t about winning, which seems to be the purpose of so many arguments in our world. It’s rather about the hashing out of something we want to understand better and that can be achieved through discourse. I also like this method of trying to understand a concept because it’s a reflection of each individual’s knowledge, their individual synthesis of all previous data, and their personal experience.

It did make me sad in several places. I mean how could a book that questions some of the more hideous aspects of society not make one sad? Does a utopia have to be constrained by some extreme circumstance (in this case living in an extremely austere environment as it’s a barely habitable world) in order for humans to live a life of brotherhood, to develop an innate sense of putting others before yourself, to not “egoize”? While that’s a sad comment on human nature, it is nice to see someone asking the same questions most of us have asked ourselves at some point. 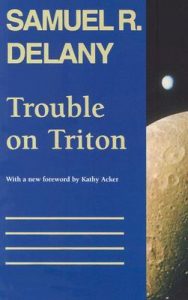 I wanted to leave you with a fun bit of trivia I stumbled upon. The full title of the book is actually The Dispossessed: An Ambiguous Utopia. I found out that Sam Delany has a book called Trouble on Triton: An Ambiguous Heterotopia. When asked about this similarity between the two titles Delany, while talking about Le Guin’s more excellent writing points, criticized her for a fairly heteronormative book that was supposed to be about inclusion and the robustness of diversity, yet only has one non-straight character  –who’s kind of sad and lonely and a very minor character. It is said that Delany’s book explores that diversity further.

He makes a solid point, but I still think that Le Guin was ahead of her time in all other respects. The Dispossessed is written in the mid 70s and a lot of those ideas she thought of as utopian are ones we are still trying to catch up with. That being said, sounds like Triton takes it one step further. He didn’t set out to write it as a response to her work. I read an interview where he said he’d finished the first draft before picking up The Dispossessed, but after reading it he did make a few tweaks so that it could be a dialogue with Le Guin. Tweaks like adding the subtitle ‘An Ambiguous Heterotopia’. Amazing!

Stay tuned, I’ll be writing about Triton in the near future.