Every year on my birthday I do something I’ve never done before. This year I decided to read a book for every year I’d been alive — it works out to about a book a week.

Remember how I told you I had read Jo Walton’s Among Others (a loving ode to well written sf and fantasy wrapped up in a ribbon of romantic fairytale) and from that book I made an extremely lengthy book list of must reads? Enter the book Pilgrimage, by Zenna Henderson. This had to be my first choice from the list as the main character from Among Others, a teen girl from the 1980’s, spoke about this novel with such reverence. 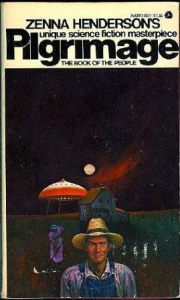 “‘Pilgrimage’, I breathed. It is a book that speaks to me. I love it. Nobody else I’ve met has ever read it.” [p 24, Among Others] Even though there wasn’t much more of a description, I knew I absolutely. Had. To read. This book! Have you ever had a book “speak” to you? It’s a feeling worth chasing down. Then she says no one she’s met has even read it, so of course that just reeled me in further. Doesn’t that get your curiosity going?

While the writing style is, um, unique, and therefore takes awhile to get the rhythm of it, once you find the beat it’s easy for the pages to float by. The other sticking point for me (though wouldn’t be pro is that the author’s religious background peeks out every once in awhile. At first it was glimpses, but after a couple of chapters, these religious sayings were so frequent that it was intrusive for me, someone who’s agnostic, but might work well for someone who is religious. There were also some racial biases that were prevalent at the time that I also found jarring.

However, it is the perfect book for anyone out there who has ever felt like an outsider looking for their karass, “and I felt myself slide down into comfort and hunger-fed belongingness” p 79. Hunger-fed belongingness, such a rich description for that aching need. I believe the novel actually takes it a step further, to give the reader a glimpse into what it would be like living in a diaspora.

I can also see how it would be extremely compelling for a teen girl sf nerd, especially in the 80’s, to read a book that centers around female characters. Not only was that largely unheard of back then, it does so in a subtle way. It does not beat us about the head with a brick: This. Book. Is. About. Women! Because. Most. Books. Are. About. Men! No. It is just a unique story that largely contains female main characters.

Oh. Is that you I see running, not walking, running to the bookstore?? Aawwww yeah. Read it. Love it. Speak of it to others with hushed, reverent tones.

Thanks for the suggestion, Jo Walton. Pilgrimage is a lovely gift. Hope I can return the favour someday.