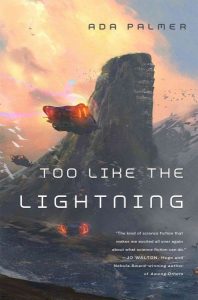 Winter is the season of re-reads for me. Something about the long nights and cold weather makes me want to grab a blanket and revisit an old friend. As I begin my fourth re-read of Ada Palmer’s excellent Too Like the Lightning, a question has been prodding me.

Who is the protagonist?

Warning: Major spoilers for all of Terra Ignota to follow.

Our narrator, Mycroft, has an opinion on this matter. Mycroft maintains that Bridger, a thirteen-year-old with the power to bring toys to life, is the protagonist of this story. Bridger is, in fact, introduced as the protagonist as early as page 4: “Cowering beneath the table, our protagonist sobbed and screamed.” Of course, Mycroft is as unreliable of a narrator as they come, and his simulated discussion with his readers later in the book reflects the controversial nature of this choice:

I will not endure this pretense, Mycroft, you object. … Thou canst not ask me to call this boy, who has barely raised his head here in thy tale, ‘protagonist.’ In a history it is absurd to call anyone ‘protagonist,’ but if thou must, it should be one who acts, and understands, who drives the story forward. Bridger is not that.

Mycroft goes on to counter that this book does indeed require a protagonist, because history is shaped by people, not by forces. The reader provides three suggestions for a protagonist, all of whom Mycroft rules out. First, the reader suggests that Carlisle Foster could be considered a protagonist. Mycroft rejoins that a protagonist must “struggle, succeed, fail,” whereas Carlisle’s personal journey revolves more around revealing already-established events. The reader then suggests J.E.D.D. Mason, but Mycroft maintains that the reader doesn’t know enough about that character yet. Finally, the reader accuses Mycroft himself of being the protagonist, to which he rejoins:

I have told you, the protagonist must determine whether this is comedy or tragedy. Surely the boy whose powers can reshape the universe will determine that, not this tired slave, a tool for others’ use, whose days of independent action are long done. I am the window through which you watch the coming storm. He is the lightning.

This section seems especially apt given the title of the book, excerpted from the following Romeo and Juliet quote: “It is too rash, too unadvised, too sudden. Too like the lightning, which doth cease to be ere one can say ‘It lightens.’” Bridger being the lightning thus alludes both to his extreme power and also his upcoming demise.

But to return to the central question: Who is the protagonist of Terra Ignota? In the above discussion, Mycroft and the reader suggest several qualities that a protagonist ought to have. They must act, and understand, and drive the story forward. They must struggle, and the story should turn on their success or failure. I would also add two further requirements: they must undergo some form of personal growth during the story. In general, the arc of a story requires not just that the protagonist affect events, but that they be changed somehow as a result. A protagonist must both act and be acted upon.

So who are our most-likely protagonist candidates? I will consider the case for a few: Madame, J.E.D.D. Mason, Sniper, Mycroft, and Bridger. The list is not exhaustive, of course, and I’d love to hear if you have another character you think ought to be the protagonist instead!

Firstly, Madame. If anyone can be said to have had a dramatic impact on the state of the world, it’s her. She singlehandedly created a network of people who serve her purposes, including basically every world leader. Does she act, understand, and drive the story forward? I think so. One of the troubles of Madame is that her actions typically are subtle, but with large ripple effects. Many of the events of Seven Surrenders feel like dominoes she has set up over twenty years all falling one by one – she’s not necessarily doing anything dramatic at the time, but events are nevertheless the direct result of her actions. Does the story turn on her success or failure? Sort of. But her success also feels like the world’s failure – it’s the precipitating event which leads to the fall of civilization and the rise of war. As a result, I actually think that Madame is the antagonist of the story than the protagonist. She has agency and her success or failure is important, but it’s tough to cheer her on.

One can hardly consider Madame without considering J.E.D.D Mason. As the leader of one of the two eventual sides of the warring world, his actions certainly have weight. He has the ability to change people with a single sentence, world leaders are jumping over themselves to give him their power, and Mycroft certainly seems to think that every world event is essentially just part of a conversation between God and J.E.D.D. Mason. Still, many of his victories feel more like the results of his mother’s manipulations than his own agency. For most of the first two books, he is reasonably content to sit in the background and worry about where Dominic has gone. For someone who is supposed to be the human incarnation of a divine being, he seems unclear about what he wants. He believes a society built on assassinations is inherently immoral, but when asked what he would build to replace it, he has no real answers. Does he act, understand, and drive the story forward? Debatable at best. Does he engage in personal growth? Not in any obvious way.

What about Sniper, then? Sniper has a clear point of view in the books, and acts in accordance with that view. In particular, they believe that sacrificing a few lives is worth the price of world peace, and that a society which is stabilized through assassinations can still be one worth living in. Their assassination of J.E.D.D. Mason is a major turning point of the story. Sniper is in fact one of the characters with the clearest point of view and the most agency to pursue their stated goals. The primary place where Sniper falls short of protagonist status is, for me, the requirement for personal growth. Sniper’s views are fairly fixed from the beginning of the book, but where their agency is clear, they are personally unaffected by the events happening around them.

In a way, it’s hard not to consider Mycroft to be the protagonist, considering that they are the narrator of the first three books. But I have to agree with Mycroft’s own protestations: they are far more an observer than a participant in current events. The actions they take are largely at the behest of others, and they don’t really have much agency within the plot of the book itself. Indeed, this is felt keenly as they are repeatedly called from one place to another by various characters, going where they are commanded and doing what they are told. Their personal growth from monster to servicer was also an event from long past, rather than something that happens as a result of the events in the book.

Finally, we return to Bridger. Bridger spends most of the first two books observing and thinking. He takes one major action (resurrecting J.E.D.D. Mason after Sniper’s assassination), and then dies by turning himself into Achilles. Does he act, understand, and drive the story forward? Definitely! The world would be a very different place if J.E.D.D. Mason had died at the end of book two. Having seen him and struggle with the morality of resurrection throughout the first book, the final decision carried real weight. Does he struggle? Does the story turn on his success or failure? Again, I argue yes. We see his struggle with how to use his powers to help the world and his frustration when things go awry. His death delineates the books as tragedy, instead of comedy. He also grows over the course of the novel, going from a kid sitting at the sidelines to one who is willing to change the world, hopefully for the better. In the end, he quite literally becomes a new person as the result of the events of the first two books.

I was somewhat surprised to find that I agree with Mycroft: Bridger is the protagonist. That said, there’s a number of good choices! Is there another protagonist candidate you prefer? Or is this history shaped by forces rather than people? Let me know what you think in the comments!

View all posts by Sophia Baker