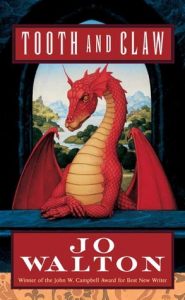 Every year on my birthday I do something I’ve never done before. This year I decided to read a book for every year I’d been alive before my next birthday. It works out to about a book a week.

When I want to write a review about a book I’m reading, I like to write thoughts about it while on page one. How is it that I didn’t write a single word about Jo Walton’s Tooth and Claw until I was half way through? Because it’s freaking excellent! Of course you have to keep in mind the rosy tint of my spectacles as a read anything by the wonderful Jo Walton. That being said, this book has the thing I look for most in a novel, a unique voice, a very precious thing indeed.

The first thing folks usually notice about Tooth and Claw is that it’s a Victorian era novel where instead of money and land acquisition motivating everyone’s actions it’s more about biological imperatives that confine the characters into limited choices: i.e. if I make this decision will I get eaten? …… wait, did I mention everyone in the book is a dragon?? So when I say biology I am talking about all the dragon lore that Jo Walton has painstakingly researched (researched?? What’s more likely is that she is such a passionately avid reader of the genre that she has absorbed a wealth of diverse perspectives on dragon lore and managed to sift it all into one place, her novel) and seamlessly woven into this society’s structure. It’s this biologically motivated decision making that forces the division between the haves and the have-nots, encourages servitude to thrive, and is the perfect environment for patriarch to dominate.

Are you wondering what could possibly tear my riveted attention away (tear it limb from limb) and start writing some thoughts down? It was a letter from one sister to another and instead of the usual avowals of sisterly love at the end of the letter (or in the Victorian vernacular: correspondence) she opts to use her last two lines to say: “Have you ever considered, dearest sister, that the situation of servitude is morally indefensible, and bad for master and servants alike? It is surely wrong for any dragon to give up their whole life to the whims of another.” Oh snap, it’s about to get real, real quick. I can’t wait to see the revolution rampage.

I think the main reason I don’t read books from this era is its romanticism of an era that exalted the white, Christian male to the detriment of any and everyone else. Rampant classism, oppression almost to the point of xenophobia, chauvinism, dare I go on? Granted the ones with strong female leads could compel me, but the romance is somewhat tainted by the power dynamics of the times. Do I have that right? I’m making an assumption here that any Victorian era novel with a female lead will necessitate a romantic plot line. If that’s a false assumption please give me titles. That being said I should not poo-poo something I have not read so let’s leave it as something to revisit after I read some Jane Eyre or maybe Elizabeth Gaskell’s North and South.

The other reason my attention wandered towards writing thoughts down was that I just had to talk about the charismatic way the characters interact with one another. Nothing is superfluous or forced and just when you think the author is about to force an aspect of a relationship she writes us a little love note, “It has been badly stated in this narrative that Penn and Sher were friends at school and later at the Circle, and being gentle readers, and not cruel and hungry readers who would visit a publisher’s offices with the intention of rending and eating an author who had displeased them, you have taken this matter on trust.”.  Are you charmed? I sure am.

On to dancing. Dancing at a Victorian era ball. Many wearing their finery in the form of hats, showing their status. Makes sense. Oh wait .. they are all dragons.

One little sentence slipped into the story about a dragon not being a dancer and for a split second seemed completely reasonable, given the context. Then the logistics tickled my brain. How would a huge dragon, average size 40 feet, with a long tail, claws instead of feet, (side note: males claws for hands as well, females have hands, hmm), dance in a cotillion-esque manner? What absolutely huge ballroom would they have to be in for such an event to occur? How do they manage to keep hats from falling off at the slightest motion of their head, maybe tied on, or specifically shaped to their head?

I like how the writing takes the everyday and spins it into something not quite imaginable, but at the same time makes it perfectly reasonable as if one wouldn’t give it a second thought. Like judges wearing justicewigs. Makes sense. Until you put in on the head of a dragon. Are their arms long enough to flip the wig on their head? How does the thing stay on? There’s this part where the attorney has an attorneywig, querywig and a pleadingwig that have to be switched up during the trial. Quirky! My brain can’t help but stumble over the logistics.

Speaking of quirks of their societal rules I love how it’s gauche to fly around when one is affluent and in the big city, but it’s perfectly acceptable for their more rural counterparts. I’d say damn the convention and would fly all the freaking time. Wouldn’t you?

I’m also liking their dragonese expressions:
Their idioms
“we have all the claws on our side”
“Veld will strike me blue for lying”, Veld being one of their gods.
And their lore
“Haner picked out the familiar constellations. The Great Beef was rising, with Little Veal at her tail. The Winter Princess held out her hand in blessing.”
Awesome!

Now the ending. First off I’ve never read such a fabulous last line as, “.. we shall leave them to take refuge in the comfort of gentle hypocrisy.” Secondly, only in a Victorian novel could so many things that were going so very wrong could, in a scant 30 some odd pages, make everything go so very right. Is this a bad thing? Jury is still out. Oh wait, do I have the correct wig on to say that?

Last thing of note, and more of a geeky, linguistic thing again, I feel like the names were carefully chosen. The name Mustan, if it’s a Muslim name, means brilliant. The character with that name happens to be a brilliant lawyer, very savvy in many matters of business. Coincidence?? I think not.

That being said I googled all the other names and for the most part the only ones that I could attach any meaning to were WoW (World of Warcraft) character names like Selendra, Agornin, so there must be a Jo Walton fan at Blizzard!

Then with other names contrary to the characters’ personalities. Take for example the name Berend which means strong bear, yet her character is anything but, especially considering her relationship to her husband. Hilariously enough according to Urban Dictionary it’s a name for, among other things, really hot guys.

Tooth and Claw is a great romp and completely different than her Thessaly series, and again very different from her book Among Others, both of which I enjoyed immensely. Not an easy thing for a writer to do, write such different books. She does it well.