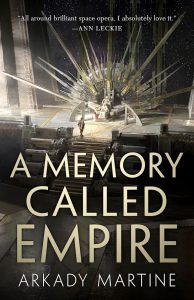 A MEMORY CALLED EMPIRE by Arkady Martine is one of the best books I’ve read this year. It’s one of those books that makes me want to become a better writer so I could create something half as good as this book. I could go on and on about what I loved about it, but I’m going to focus on two things: what the book has to say about Empire, and the amazing & fascinating characters.

First, the characters. The book has a wide cast, yet I felt that every character, even the ones with less scene time were fully people, complex in their desires and development; often subverting their archetypes—or their roles in society—in ways that felt very human. All of them were memorable, the sort that stick in your brain even after they’ve left the scene.

In particular, I loved Three Seagrass, the protagonist Mahit’s political aide and administrative assistant. At the beginning of the book, it’s easy to share Mahit’s frustration and suspicion of the character—she seems to be a political operative, potentially a spy. Three Seagrass does not conceal that her primary motivation is political ambition. She wants to rise in the ranks of the Teixcalaanli bureaucratic nobility, she wants to be important.

And yet—and this is one of my favorite things about the book—Three Seagrass’s political ambition is never portrayed as a bad thing. She remains a true comrade to Mahit—and her other friends—throughout the book. She is a good person—and she is not a good person IN SPITE of being politically ambitious, but BECAUSE she is politically ambitious. Yes, her primary drive is to advance her career, but she does so by being extremely competent and loyal, not through negative actions often associated with female political ambition such as backstabbing or duplicitousness.

I think it’s also great that Three Seagrass does all this without veering towards that other now-common trope: escaping negative/submissive feminine tropes by embracing masculinity (example: the woman hero who puts on a suit of armor and/or some tight pants and becomes a warrior/conqueror, etc). I have no issue with that trope, and can think of some great examples, BUT it’s very cool that in this case we get one character who kicks butt politically while at the same time happening to fit in with the more feminine gender presentation/role of that society (though I think that Teixcalaanli gender norms and sexuality could be a fascinating article in itself).

I’m a bit sad that I was amazed and enraptured by this aspect of the character. The trope of evil ambitious woman is so common: Lady Macbeth, Cersei, etc. Political ambition is often cast negatively across genders (and for good reason), but I feel that it’s much more common to see positive portrayals of political ambition for masculine characters. And I feel that this moment right now especially needs examples of the ways in which women can be both good and politically ambitious (see: the likability debate about women presidential candidates; the ways in which their emotional expression must be more circumscribed, etc).

The other thing I loved about A MEMORY CALLED EMPIRE was the things it had to say about Empire. According to the author, the Teixcalaanli Empire is inspired partly by the Byzantine Empire, among others.

Fittingly, one of the major themes in the book is how empires use the concept and iconography of empire (and the associated narratives) to wield emotional power over their subjects. I was amazed at how well the author made me really feel the power of the imagery and narratives of the Teixcalaanli Empire.

When the main character Mahit sees the Sunspear throne for the first time, I wasn’t just reading about how overawed she felt—I was feeling that same emotion. Throughout the book the author made me not just understand the way that imperial imagery is used to instill loyalty in both subjects and foreigners, but also made ME feel that way. I began to feel loyalty and love for the titular empire, even while becoming aware that it was an amoral expansionist polity that commits atrocities and cares more for power than for lives.

Reading this book forced me to interrogate the extent to which I am primed to accept and identify with imperial imagery. From a young age, history classes taught me about the Glory of Rome, focusing more on the map-painting, the laws, and the infrastructure than on the destruction of lives and cultures. As an adult, I see the same empire-worship in historical strategy gaming communities. Players of Crusader Kings II and Europa Universalis IV often eulogize the Byzantine Empire and mourn its destruction, and if people talk about the reign of Emperor Basil II it’s in awe of his ability to make the empire powerful again, and not in horror of the atrocities he committed against the Bulgar peoples (there is a reason he is called “The Bulgar-Slayer” and you can look it up if you like, but remember that our accounts of the incident are largely from Byzantine sources and humanize the empire and the emperor more than the blinded Bulgars).

Having written this, I am now considering the ways in which these two themes, the power of imperial iconography and the power of good politically ambitious women, interact. On the one hand, the book shows subtly the ways in which power—both its acquisition and the work necessary to preserve it—requires amoral decision making. Not immoral—just decisions that are informed by power dynamics rather than ethical concerns.

On the other hand, the book does a wonderful job showing how a woman can be both ethical and politically ambitious, and the ways in which ethics—loyalty, friendship, compassion, etc—can be a boon to political ambition rather than a hindrance.

These two themes seem to contradict—and they do so in very fascinating ways. Yes, Three Seagrass is a good person, but we see that primarily through her loyalty and friendship with her immediately social circle. Yet, she’s also a part of the Teixcalaanli government, and thus complicit in the imperial atrocities on the frontiers—not to mention the fleeting glances we get of marginalization on the imperial planet-world capitol. BUT, she also works to prevent the imperial annexation of Mahit’s home-system. Would she have done that, would she have cared, if it was a stranger’s home?

This fascinating complexity and contradiction is in my opinion the sign of a well written book. The world is a complicated, confusing, and contradictory place and we are all trying to make sense of it. A MEMORY CALLED EMPIRE is both a reflection and an interrogation of the empires and political systems we live in, and I am so glad that I read it.

There are other things I loved about the book—it’s rich and full of wonders—but these are the ones I felt compelled to talk about. If you haven’t, go read it, especially if you liked Ancillary Justice. A MEMORY CALLED EMPIRE continues the conversation that the Imperial Radch series was a part of. The book stands well on its own, but I am very very excited for the sequel, A DESOLATION CALLED PEACE, and for all the books Arkady Martine writes beyond that.