I can’t properly convey how stunned I was by Alexandra Rowland‘s A CONSPIRACY OF TRUTHS and A CHOIR OF LIES. They are without a doubt the best two books I have ever read about the power of stories and the responsibility of the storyteller. The author is clearly someone who is utterly in love with stories and who has thought deeply about what a story is and what a story does.
Spoilers to follow (PS GO READ THEM NOW IF YOU HAVEN’T).

Writing stories about stories is something that has been Done Before (especially in cinema which is often obsessed with patting itself on the back). However, these stories often focus solely on the positive aspects of stories: their ability to inspire, comfort, rouse, etc. Choir/Conspiracy takes a much more nuanced view, and it does this by focusing on the storyteller. 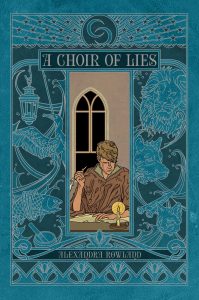 First, the storytellers in these two books are just absolutely lovely characters. Chant (which is both his name and title) is the sort of outwardly grumpy yet secretly soft old man that I’ve seen before. Yet, the character doesn’t read as cliche AT ALL, and it frustrates me to no end that I can’t properly explain why, or express why I fucking love Chant and his stupid bullshit so much. Maybe it’s that his snark mostly punches up instead of down? Or that his grump-snark is undercut with real vulnerability—stemming from both his frailty and his powerlessness at the hands of the state. Doesn’t matter. I could make up some Chant-like story to explain why, but all that really matters is that I fell in love with him by the end of the first page of the book.

But my love for Chant is nothing compared to my feelings for poor Yfling, Chant’s apprentice. The author does an amazing craft thing of giving us space to get to know Chant before introducing Yfling. He comes in at the perfect time—too soon and the two characters would have overshadowed each-other; too late and he wouldn’t have landed as hard as he did.

In contrast to locked-down Chant, Yfling’s soul is wide open and beaming. Poor Yfling loves and wants to know everyone he meets. This is a type of character I want to see more of in fiction. I’ve had enough stoic Geralts; what I need in this time of gathering darkness is characters whose defining emotion is love.

The focus on the storytellers—and their differing approaches to storytelling—is critical, because it allows the books to really dig into the debate around the death of the author and authorial intent.

Both CONSPIRACY and CHOIR contain stories within stories. At a surface level, we get to see how the different storyteller’s approaches and desires inform the way in which they tell the story—not just in the text and metatext of the story, but in physical manifestations like body language and ritual.

CHOIR introduces another Chant (remember, it’s a title not just a name), who has a radically different approach to the quasi-religion of their storytelling profession. And the book does amazing things with metatextual footnotes, so New-Chant tells us directly how she would have told a story differently from Yfling. We get to see the same thing in CONSPIRACY, in the way that Old-Chant critiques Yfling (poor Yfling, always getting criticized). So, both books show clearly that authorial intent matters in the way that it shapes the story.

And yet! In both books, the stories told by Chant and Yfling spiral way out of control. We see the Author’s Intent for these stories, and then we muddle along for a bit in a space where the impact is elided. Someone hears the story, and they mull on it and neither the storyteller or the reader gets to see how it’s really affecting them internally; how true that is, and how painful as an author to wonder “what did they really think of my story” or “did my story really land the way I wanted it to?”

And then! The story spreads and wreaks havoc across the land not just in ways they didn’t anticipate, but that in ways they actively hate. Old-Chant semi-accidentally topples a fragile political system. Yfling causes economic chaos and financially ruins his exploitative mentor.
So good, and so nuanced. I love how CHOIR and CONSPIRACY both show in their own ways that two things are true simultaneously: 1) The author’s background and intent absolutely shape the stories they tell. 2) Once the story is told, it’s out of the author’s control.

And the books grapple with the extent to which the author is responsible for what happens after they tell a story. Old-Chant believes that it’s not his fault that his stories were used as fuel for the chaos-fire. Yfling, in the second book CHOIR, starts out with Old-Chant’s viewpoint, but grows over the course of the book to understand that the author is absolutely responsible, even if it’s not their fault.

This lands especially hard in part because the books show that all of the following can be true: 1) A story can be beautiful—well crafted, poignant, gripping, etc. 2) A story can be true, in the sense that it reveals a deeper truth or as Rowland puts it “truer than true”. 3) A story can harm. It can topple a country. It can hurt the reader. It can be used to hurt others.

None of these cancel out the others. There isn’t math you can do to measure the goodness of a story’s impact. The story is what it is, and the author is both responsible, powerful, and powerless all at the same time.

I really appreciate how nuanced these books are about stories. I dearly wish that everyone involved in recent discourse had read them. I have learned through pain how stories can be knives, both beautiful and deadly. And how they can be shields and hugs and food. It’s all too complicated for me to express, but Rowland does an amazing job exploring this stuff and all its nuances. If you forced me to describe these books in three worlds they would be: STORIES! NUANCE! QUEER!

Which reminds me; I love the queer world-building.

CONSPIRACY is set in a dreary bureaucratic nightmare-country, yet the legal/cultural approach to marriage is beautiful. It’s very reminiscent of Ada Palmer’s ‘bash system in Too Like the Lightning. Marriage involves multiple people and can involve both romantic and/or platonic-economic bonds. Some members of a family may be romantically involved, some may be economically involved, and some may be both.

I love this, and wish the modern world facilitated something similar. I yearn for a tight-knit community that isn’t strictly delimitated by the atomic family. Not really a polyamorous relationship, but whatever the legal/economic/platonic equivalent is? I want a ‘bash; I want Nuryeven’s family system.

CHOIR is set in a country bursting with a plethora of genders and pronouns. I loved this, it was beautiful, and yet it also made my heart ache. I want to live in a world where people like me are just casually part of the fabric of society. Maybe we’ll get there one day? I don’t know, but even if we do, we’ll all still bear the scars of the hate and oppression of the present. I’ll never get to live in CHOIR’s unblemished world. It hurts.

I loved the way in which the author completely upends my feeling about the characters. CONSPIRACY made me fall in love with Old-Chant. By the end of CHOIR, I hated Old-Chant and his stupid bullshit more than I’ve hated any character in a long time. CONSPIRACY tempered his grump-snark with his secret feels, but those feels don’t matter if his actions are so brutal.

How dare he walk away from the consequences of his actions? How DARE he abandon poor Yfling? I hope he’s cold and hungry forever, and his stupid needless asceticism dies out with him.

And talking about Old-Chant’s stupid asceticism and the ways that Rowland is so good at up-ending everything: I love love love the way that the Chant quasi-religion is handled. Religion world-building is incredibly hard. Bujold’s Five Gods series is one of the best examples, but it’s rare for me to read a book that does it well.

What Rowland absolutely nails is the complexities and realities of inter-faith doctrinal disputes. I love how the first book sets up the Principles of Being a Chant, and then the second book knocks all that down. New-Chant is HORRIFIED at the nonsense Old-Chat passed off on Yfling as doctrine.
Too many books portray their world-building as Truth, and I loved how Rowland undercut that and showed how world-building is just another story that people tell about how things work and why. We all world-build all the time, and none of us agree about any of it.

And for the first book and most of the second, the Chant religion is mostly about belief and doctrine and the sorts of disagreements religious people are familiar with in our world.

And then SHUGGWA shows up! The god of the refugee ancient Chants, whose character has been foreshadowed throughout the narrative, whose presence has been invisible. And we only ever see SHUGGWA in dreams, but Rowland conveys such grandeur, such mystery and menace that SHUGGWA earned a place in my “Top 5 Fantasy Gods” list (which sits next to “Top 5 Hamburgers I’ve Eaten” in my brain).

The last thing I loved about CONSPIRACY and CHOIR was all the places where Rowland was clearly showing off. This is an author who is good at telling stories, and knows it. Especially in the second book (CHOIR)—Rowland does these little flourishes, like the small smile of a performer who just pulled off something impressive that made the audience gasp.

My favorite of these moments is when, at a dinner party, Yfling’s big boss-lady starts talking about the details of her psuedo-tulip purchase contracts. Then she stops, leans in, and says something like “oh well but you wouldn’t be interested in hearing more of the boring details about this.” And her audience protests and demands to hear all the boring economic details, and I SCREAMED out loud, because I felt the author looking straight at me and winking. Because now I wanted to hear all the boring details, and even though the author was SO OBVIOUS with their trickery, it worked on me so well.

Like the best magicians, Rowland shows you all their tricks even as they’re hoodwinking you into having feels. And for that (and all the above), CHOIR and CONSPIRACY are now on my “enthusiastically recommend to fellow writers” list.