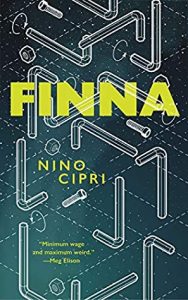 FINNA by Nino Cipri is exactly the sort of exquisitely queer, anti-capitalist fiction I want to read more of.

One of the coolest things that FINNA does is to cishet-code its villains. Queer-coded villains is such a common trope as to be unremarkable, but I sat up straight when I realized what Nino Cipri was doing with their descriptions of the villainous pseudo-ikea managers. These avatars of capitalist apathy for the well-being of the workers are depicted with overtly hetero symbology in a way that felt both subtle and obvious.

I was fascinated with how—via the POV characters and the prose voice—queerness is depicted as neutral and normal, while cishetness is depicted as unique and monstrous. But this didn’t feel like a surface-level reversal. The villains aren’t monstrous because they are cishet (in the way that in a lot of media queerness is depicted as villainous in-itself), but rather through their actions and their apathy, as well as the way they uphold the white-supremicist cishet-normative ableist capitalist structures which they sit atop.

The plot of the story follows the protagonists’ escape from the horror of being a worker at pseudo-ikea into a series of alternate worlds, some equally horrible, some wonderous. What I absolutely loved is that our world was not the default—but that what set our world apart was fear—queerphobia, rcaism, xenophobia, etc. This felt so hopeful to me because it says that all the things that make our world such a horror for so many are not the default. The rest of the multiverse IS better and, if we could just step through the right portal, we might be free to swim in the currents of a lovingly queernorm world. Alas, I am stuck here (though I am grateful for glimpses of better worlds).

Another thing that absolutely won me over to this novella is the way the non-binary protagonist, Jules, is depicted. At no point does the book give ANY indication of Jules’ AGAB (assigned gender at birth). Jules is able to be simply non-binary instead of the gender-lite version of their AGAB. I really appreciated this, since I’ve seen the opposite (outing trans and non-binary characters via the ways in which they don’t pass) so many times. 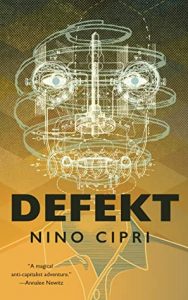 I loved FINNA, and I’m excited to read the sequel DEFEKT, which just came out.